A Fever You Can’t Sweat Out 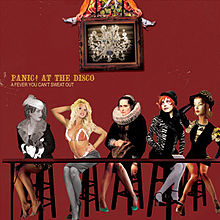 A Fever You Can’t Sweat Out Is the debut studio album by American rock band Panic! at the Disco. Recorded primarily at SOMD! Studios in College Park, Maryland with producer Matt Squire, the album was released September 27, 2005 on Decaydance and Fueled by Ramen.

Written and produced during and shortly after the band’s graduation from high school, the album was recorded during a short time frame which left the young band exhausted. With lyrics written by former guitarist Ryan Ross, the record covers social issues that the band points on through various songs, and topics such as sanctity of marriage, adultery, alcoholism and prostitution are woven throughout the album.

Bolstered to fame and success by the single “I Write Sins, Not Tragedies”, as well as “The Only Difference Between Martyrdom and Suicide Is Press Coverage”, the album peaked at No. 13 on the US Billboard 200, spending 66 weeks on the chart. The album received polarizing critical reviews, with many professional music critics appreciating the fun and catchy atmosphere, while other reviewers differed in their opinions toward the originality and sincerity of the record. The album has been certified double platinum by the Recording Industry Association of America (RIAA) for the shipment of two million copies. It is by far Panic! at the Disco’s most successful release, having sold over 1.8 million copies in the US as of 2011 and over 2.2 million copies worldwide.