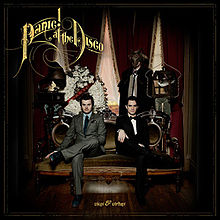 Vices & Virtues Is the third studio album by American rock band Panic! at the Disco, released on March 22, 2011 on Fueled by Ramen. Produced by John Feldmann and Butch Walker, the album was recorded as a duo by vocalist and multi-instrumentalist Brendon Urie and drummer Spencer Smith, following the departure of primary lyricist, composer and guitarist Ryan Ross and bassist Jon Walker in July 2009.

While Walker and Ross’ exit left a hole in the Panic! songwriting regime, the experience became the catalyst for Urie finding his own voice and the confidence to take over as the band’s principal songsmith. The lyrics touch on themes of manipulation and confusion. Vices & Virtues took over two years to create, and the increased time in the studio brought forth new musical experimentation.

Upon release, the album received generally mixed to positive reviews. Critics praised the album’s wide variety of musical stylings, while citing compositional simplicity and Urie’s verbose lyricism as detractors. Preceded by lead single, “The Ballad of Mona Lisa”, the album debuted at number seven on the Billboard 200 selling 56,000 copies within its first week.